“Has Michelangelo not portrayed Vittoria Colonna”,

asked a desperate history painter in the nineteenth century, when he was assigned a portrait of Vittoria Colonna. He solved the problem by substituting a model.  A poem by Michelangelo in the hand of fake Vittoria, not even a sonnet of her own, did him fine to present the woman as Vittoria Colonna.

The great biographer of Italian Renaissance, who, as Vittoria’s guest, stayed on the castle in Ischia for several months in 1528, passed down a precise description of her striking physiognomy:

Resembling the eyes of Venus, Vittoria’s eyes are black, as if edged by shining ivory. However, they are not coquettish. Their beauty is due to affectionate cheerfulness, protected and decorated by eyelids and eyelashes like tender wings. Her eyebrows are slightly curved in elegant lines.

Her face is encircled by ebony black hair, softly gleaming, interwoven with gold, like Leda’s hair, flowing down from the tender parting across her temples, smoothened by delicate hair oil so that no wisps come saucily to the fore. Her beautiful hair adorns the broad, free forehead.

As they are not grown together, the lobes of her pretty ears indicate exact judgement. Although wonderful earrings are dangling from them, the beholder’s eyes are only fascinated by her ears.

What a lovely nose! It resembles the noses of the Arsacid Dynasty in the Parthian Empire.  A tiny hill has been more suggested by Nature than accomplished and does not affect her female charm. 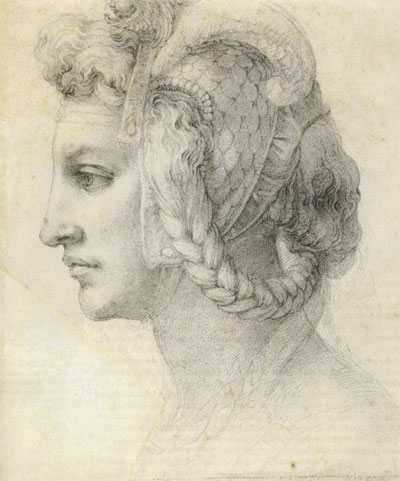 Giovio and Michelangelo, not knowing of each other, emphasize Vittoria’s faible for sophisticated coiffures and decorative accessories. Both also accentuate the androgynous beauty of Vittoria Colonna.

In spite of her soulful eyes and her sensual mouth Vittoria’s posture in the drawing, which was at Thomas Mann’s disposal, is formal and stiff, as if the drawing had been meant to serve an official purpose. Michelangelo also made a pendent drawing of her husband, which got lost. However, in the year 1613, Antonio Tempesta still made engravings of the two drawings. The copyist added legends informing about the underlying drawings by Michelangelo.

Although Michelangelo becomingly draped a little cap embroidered with precious pearls and jewels - according to Vittoria’s own design - into her gorgeous hair and gave his undivided attention to her thick braids, he felt irritated by the resplendent demeanour of his beloved marchesa.  One of his poems reads like a mocking comment about this drawing:

Who attends to this gewgaw, when she is a divine poetess?

From where do gold and silver take their splendour?

The gems receive their gloss from her eyes and not from their own resources. 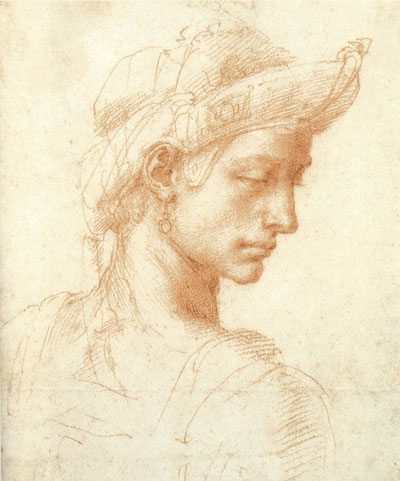 The features of the meagre young woman again correspond to Paolo Giovio’s description of Vittoria Colonna. A striking feature, finely elaborated in the drawing, is the pretty ear with the earring, attracting Giovio’s attention, too. Michelangelo emphasises Vittoria‘s androgynous appearance, however softening the slightly masculine touch of her features  in an arrangement of fine lines  on her face, turban, neck and dress,  expressing the physical and psychic fragility of the young woman and letting intuit the tender feelings of the artist for her.  Michelangelo could not avert his eyes from the face of this woman: “From near and far my eyes can see where your beautiful face appears”. He was so enthralled by her face that he only perceived death in any other beauty. To intensify his awareness of this singular woman he would have preferred transfiguring his whole body into one single eye.

However, the drawing is no portrait of Vittoria but an image bringing her psychic dynamics to the fore.  Michelangelo introverted the glance of the young woman. Her strong inner unrest, still made visible in short, hatched lines has been controlled by the young woman in a posture of thoughtful composure  that may have inspired Michelangelo to this extraordinary drawing, in my eyes the most intimate work of art he has ever created.

Half-Figure of the Young Widow 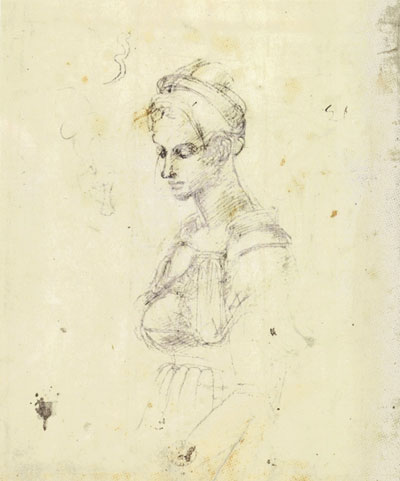 This spontaneous drawing is dated in the year 1525, when Pescara died and thirty-three year old Vittoria became a widow. Only a short time ago Michelangelo must have created the official drawing of Vittoria as the proud consort of the great imperial general Pescara: “An aristocratic bird of paradise, I then moved my proud plumage with a wide stroke of my wings,” Vittoria poetised.

Instead of the extravagant coiffure the widow has now bound a scarf round her head after exchanging her costly brocade robe with a plain gown, which also struck an inhabitant of Ferrara:  „ This morning Marchesa of Pescara visited the duchess in a simple dress.”

Michelangelo drew the young widow as a half figure to convey an impression of her external and internal change. Her depressive mood is shown by the elaborate inclination of her neck in contrast to the habitual proud posture of her head, according to Paolo Giovio, expressing “seriousness without rigour, serenity without levity, friendliness without coquetry”.

Again, Vittoria’s glance is introverted by Michelangelo to give an idea of her inner struggle against despair and suicidal tendencies, and of her revolt against death. The poetess dared giving voice to her emotional uproar in her sonnets, overriding the widow’s socially enforced habit of silent mourning.

However, in her face, so carefully elaborated by Michelangelo, braveness and composure are gaining the better of her despondence. Even a trace of her former pride and self-assertiveness has returned, contrasting tragically with the lonely, fragile figure of the young widow.

The answer is encased in these empathetic drawings Michelangelo created of his beloved Marchesa. Enamoured Michelangelo desired deep understanding of this woman adored by him with every fibre of his heart, aspiring to mirror her soul in her face and her body language. Had he portrayed her, Vittoria would have concealed her innermost being behind an intentional rigid posture. Only by drawing Vittoria Colonna Michelangelo could visualize in his image her inner dynamics, her spontaneity, the unrepeatability of the momentary appearance of this woman  unique in his long life.